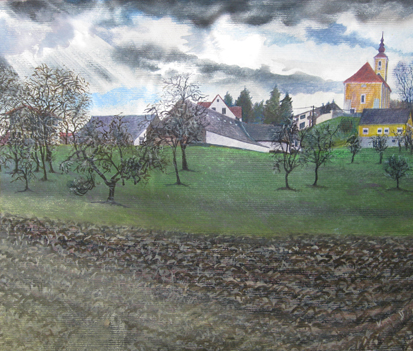 The village of Sankt Margarethen, seen from the south.

It is in the shade; on the north-western slopes of the Buchkogel a lightshow seems to be going on,

due to the rainclouds breaking up, allowing both direct- and reflected sunlight to brighten up the scene,

against which the village is silhouetted.

An unexpected sunray dropping onto an unkempt garden, when the rest of the village is in complete shade.

Isn’t it amazing what a bit of sunlight can do to something that is intrinsically boring?

Even a flat building will look nice if it is touched by a sunray.