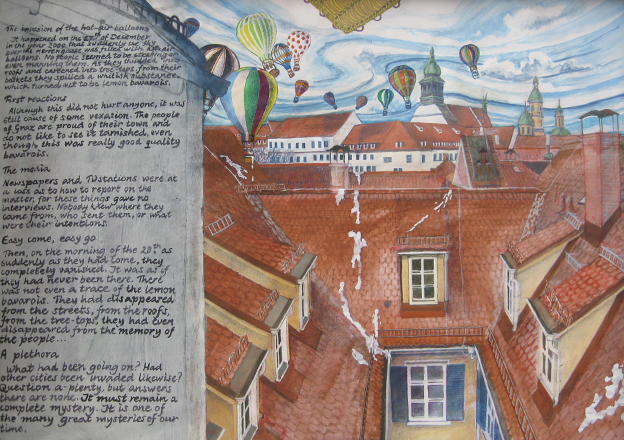 It happened on the 27th of December in the year 2009 that suddenly the air over the Herrengasse was filled with hot-air balloons. No people seemed to be steering or even manning them. As they hit roofs and careened into tree-tops, from their baskets they spilled a whitish content, which turned out to be lemon bavarois.

Although this did not harm anyone, it was still cause of some vexation. The people of Graz are proud of their town and do not like to see it tarnished, even though this was really good quality bavarois.

The media were at a loss as to how to report on the matter, for these things gave no interviews. Nobody knew where they came from, who sent them, or what were their intentions.

What had been going on? Had other cities been likewise invaded? Questions a-plenty, but answers there are none. It must remain a complete mystery. It is one of the many great mysteries of our time.